Life was good, favors and blessing to know that your right foot stepping on a straight road, namely the people whom you have given favors to them; not the (path) of their wrath nor perverted their way, QS (1: 7). The road to success, happiness and Heaven as best reply to Muslims who believe and do good works. But is it true that we step your foot swing toward eternal heaven lasting nan? (or precisely herded We go to Hell? Nauzubillah minjalik) 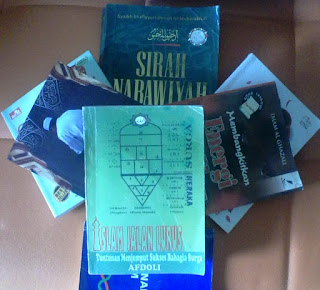 Book (Qur'an) there is no doubt thereof; guidance for those who fear QS (2: 2), and We have sent down to you clear verses; and none reject them but those who are wicked. QS AlBaqarah (2:99)
The above verse is clear that the Qur'an is the revelations of Allah without a doubt and clearly. But sometimes we interpret the Koran just follow the flow, class or school of thought that we have adopted. The argument of the Koran is often used simply to reinforce our opinions before. So that there is disagreement, the differences pointed to split the people. Name of Islam as a congregation occasionally lose fame with the group and the group. Islam in Indonesia at all times identical with NU and Muhammadiyah, so fast in congregation itself becomes difficult. Alhamdulillah This year Lent and feast difference tdak visible difference is time. So also says schools of occasional times more prominent than unity. This fact has been reminded of God through His Word:
He was the one who lowers Al Book (Al Quran) to you. in between (as follows) there are passages muhkamaat, That the main points of the contents of Al-Quran and the other (verses) Book;. As for those in whose hearts astray, so they follow sebahagian verses Book; thereof to cause a scandal to search ta'wilnya, Yet no one knows but Allah ta'wilnya. and those who are firmly grounded in knowledge say: "We believe in the verses of the Book; it was from the side of our Lord." and can not take a lesson (from it), but people who have sense. Sura Al Imran (3: 7).
If this is done, of course, makes us away from the straight path inclined even to heresy. Therefore Books Islam the Straight Path is using verses muhkamaat, so it can serve as a guide us in understanding the Qur'an and using verses Book; more precisely.
Islamic book Straight Street is also present, God willing, will give guidance in picking successful people happy and heaven. Pick more appropriate word to use because of the real success, happiness and heaven is the nature of us as Muslims. However, because of bigotry against the flow, and other schools of excessive lead us away from him. For that there are three goals of Islam book Straight Path is as follows:
Three goals in the above can be seen in full in the book of Islam the Straight Path. May the presence of Islamic Books Straight Path can be a vehicle for us to share and complement each other and remind each other towards Muslims rahamatan lil Alamin.
To Download Islamic Books Islam jaln Straight simply via the link below (sorry link is not active, because the books are being revised)
Share on Facebook
Share on Twitter
Share on Google+
Share on Ayobai