Illustration picture of Heaven and Hell

Based on Straight Street Book Cover Islam is seen that depicted illustrations of Heaven and Hell. Heaven has been interpreted many different. So many opinions on the surge, especially in number. Some argue that a heaven, heaven is no mention that there are two, three, four, seven, eight. There is even a mention of levels of heaven to 100 and 120 to many incalculable. 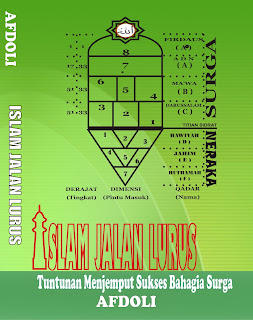 Sometimes the difference in also causes discord among us. Not infrequently with what we can instantly recognize a person or group flow through a number of paradise understand.
Therefore Books Islam the Straight Path illustrates levels of heaven. The illustrations God willing, will deliver on the understanding that it is true that we debated together. Books Islam the Straight Path was present to justify all the opinions about the number of heaven. Want to argue heaven is one, two, three, four, seven, eight and many others. Inshallah missed through 31 science concepts in the book of Islam the Straight Path.
So that we as Muslims do not need to be mutually declare that our group is the most correct. No need to blame other groups as the group is wrong. Because actually all that opinion is right and we do not need to be quarreled because of those differences.
How could all the different opinions that Islam justified?
Allah willing, Islam Go straight through the book can be explained. This is done by using the concept of degrees, dimensions and qadar as basic science 31.
Here is briefly explained to us who still have not had time to read it. About how disagreements about the amount of this paradise happen.Analogues same as when we define the four men were given the task of building senayan (DPR / MPR Jakarta) from four different sides.Each only focus defines senayan building through a side sees only that there are of course the rear, left side, right side or front only. The result of course we will get different results with another friend. Hopefully you yangdidepan not to fight with the turbulence behind the fountain. Because the pond fountains can be seen from the front of the building senayan.
Similarly Heaven and Hell, has been clearly illustrated in the Qur'an and hadith. Our lives are peeling interpret. Inshallah Concept degrees, dimensions and qadar in Islam book Straight road will take you to see it from all sides and even from its peak dimension.
With a view of the highest dimension, you will be easier to understand all aspects of life. Differences of opinion, the schools and classes you can see it more wisely included can smile. God willing we can be more aware of God's power is so great. You will be more patient and grateful for the gift that God gave to us under any circumstances.
In addition to the concept of dimension, Islam also recognize the concept Degrees and Qadar. All three support each other and build. The degree will reinforce the concept of thought-dimensional depth. while Qadar will expand the range of dimensional thinking. Insha Allah Quran sciences door will be open for those who believe, knowing and understanding.
Because actually means the Koran is a guide for the righteous, those who know and those who have sense. Do people see that what is revealed to you from your Lord, it was the same as the person who is blind? only the people of understanding who can take a lesson, Qs Ar Ra'd (13:19).
The Qur'an contains full knowledge that has not been revealed. We live as Muslims respond because the Quran is a way of life. And should Quranic verses more afdol if truth evidenced by Muslims themselves. Insha Allah through Islam book Straight Path will bring the understanding of one point of view to explore the Koran.
Please be Complete can download Islamic Books Straight Path
Share on Facebook
Share on Twitter
Share on Google+
Share on Ayobai

0 Response to "Illustration picture of Heaven and Hell"